Marolyn Ford is available to speak at your meeting.

After going blind at age 18, who would have thought that those same blind eyes would one day see?  Thirteen years later, they miraculously did! 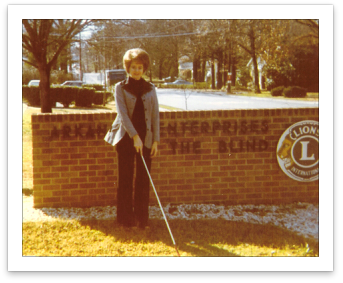 Marolyn’s story of blindness was a progression.  She could see forms, but not faces but that didn’t stop her even after that partial sight left.  She attended Tennessee Temple University and then the Arkansas Enterprise for the Blind where she learned to adapt to living as a blind person.

Thinking medical science would, some day, provide a “cure”, she made sure to move her eyes in the direction of any sound she heard in an effort to keep her muscles healthy.  After thirteen years of prayer and believing God for a miracle, God gave sight to Marolyn's blind eyes. "I can see, Acie, I can see!" she shouted.

After the miracle or restored signt Marolyn traveled extensively for the next 25 years, singing and sharing her miracle story. Marolyn spoke to millions of people worldwide speaking in crusades, universities, corporations, teaching conferences, and television and radio interviews. Additionally, she engaged in smaller meetings including retreats, church meetings, and club banquets.

Twenty four years later, after a fall, she broke her back and started having difficulty eating, drinking and eliminating; she now had total digestive paralysis!  After four years of alternative elimination processes, the colon’s elasticity was gone and therefore created a need for intravenous feeding through the subclavian heart vein.  Throughout the next 8 years there were many battles with Sepsis requiring hospitalizations every year, then every six months and eventually every three weeks.  Her body’s ability to fight infection and maintain life was nearly gone.  Since she couldn’t eat, in order to avoid lockjaw, she was required to exercise her jaw muscles by chewing the outer edge of a pizza crust, like a dog chews a bone.  She also needed to stimulate her taste buds with a blueberry, so that she would not lose her ability to taste food; the ability to swallow anything was gone.  At a height of 5’6”, weighing only 92 lbs. death’s door was a familiar sight. 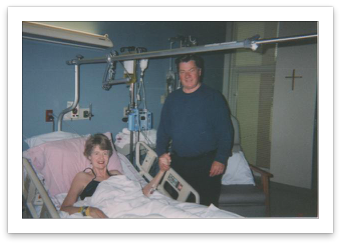 In the pit of despair with death right around the corner she heard the third verse of the hymn entitled “Leave it there” and it was just what she needed.  “If your body suffers pain, and your health you can’t regain, and your soul is almost sinking in despair; Jesus knows the pain you feel, he can save and he can heal.”  These words were just what Marolyn needed to hear and gave her the faith she needed to continue on.

Six months later, the ability to speak or move was nearly impossible, but she managed between breaths to ask her husband to pray one . . . last . . . time. . . Never able to stay awake except for the nurse giving Marolyn her medication, she fell asleep after the prayer.  Acie had to leave the house by 5:00 a.m. the following morning.  He knew Marolyn was still breathing when he left.

The quivering of her body had subsided.  Still in this world when she awoke, she wondered if God had intervened.  The nurse gave her the blueberry needed to stimulate her taste buds and to her surprise, she was able to swallow it!  It actually went down! This had been a twelve year struggle with life and death.

We serve a mighty God who said, “My Son, pay attention to what I say, listen closely to  my words: Do not let them out of your sight, keep them within your heart; for they are life to those who find them and health to a man’s whole body.”  Proverbs 4:20-22 (NIV).  Marolyn’s healing had come. Praise God!

Since her second miracle of restored health, Marolyn is fully active in ministry once again. She is available to speak for your organization. Please contact: marolynford@bellsouth.net. 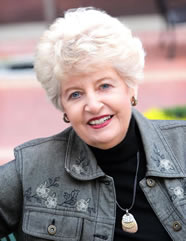 Marolyn Ford has been blessed with two fantastic miracles in her life. She has been physically healed by the power of God from thirteen years of blindness and twelve years of digestive failure, through bedside prayers. She has a powerful story to tell! She gives all praise and glory to God for the wonderful gift of healing that He has given her.